The site is secure.
The https:// ensures that you are connecting to the official website and that any information you provide is encrypted and transmitted securely.

Background
The National Institutes of Health (NIH) Office of Research Services (ORS) Scientific Resources (SR) Cluster, including the NIH Library, from a target population of senior leaders and early career biomedical investigators of the NIH Intramural Research Program (IRP). The study, conducted over the past year, has produced results that offer guidance for ORS in its strategic planning, charting a course for responsive and effective services to the IRP for the next five years. The principal questions addressed by the study were how the practice of science may evolve, how key user groups (particularly early career practitioners) see the future of science, and what type of innovations are necessary to serve key users better. Thus, we named the study “Forecasting Science.”

Using a combination of interviews, focus groups, and a survey of the IRP, the ORS SR, in collaboration with IRP leadership, sought to understand, in particular, differences and similarities between researchers early in their career and those who have more experience and/or tenure. NIH retained Outsell Inc. to complete this study.

Key NIH Library Findings
The Library asked questions about key initiatives in the survey portion of the study. Results indicate that bioinformatics is the top need from the NIH Library with 60% of survey participants ranking it critical or very important, followed closely by data management at 55%. The Technology Hub is also seen as a strong need, according to 45% of respondents. 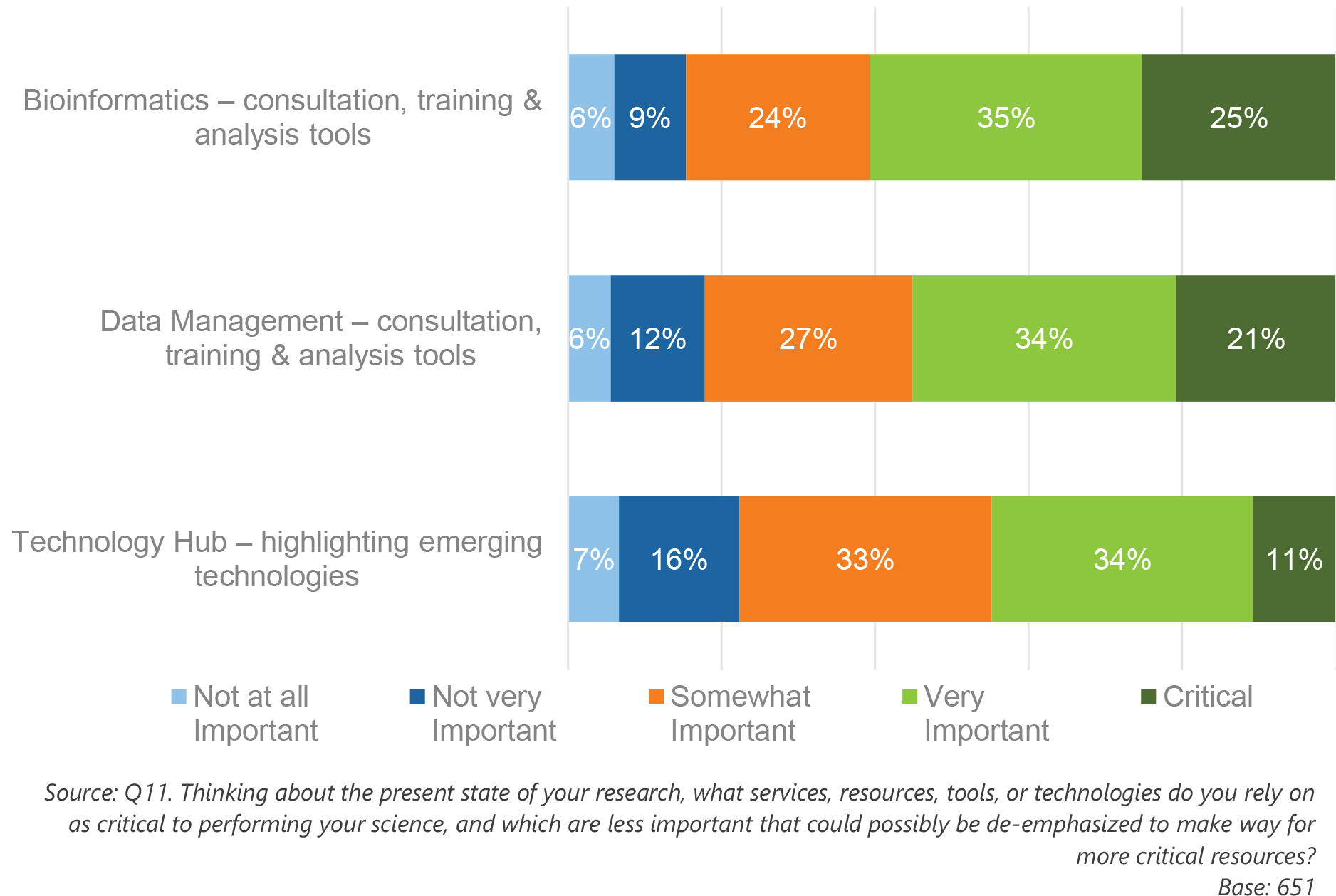 In interviews and focus groups both senior and early career (post-docs, fellows, tenure-track) scientists had high praise for the NIH Library, especially the depth and breadth of online literature access and training seminars, saying the Library was a critical and daily component of their research: “I couldn’t live without it.” Several were aware of the Informationist program and two of the interviewees had used it. Others said the Informationist program sounded interesting and could be useful to them: “They should market it better – pick a couple of key institutes or areas with potential to use the program and target market them.” Some early career scientists were unaware of the Library’s document delivery services and access to resources from off-campus locations.  Both groups saw the physical space as an important refuge for getting work done.

One of the key recommendations coming out of the study overall was to heighten awareness of ORS services, including the NIH Library. In response, the ORS Scientific Resources Cluster divisions, individually and collaboratively, are planning to put in place a series of responses, including outreach initiatives, in the coming year.

Overall Key Findings
The full report is currently under review by ORS and Office of Intramural Research (OIR) leadership and will be shared in the near future. Below is a synopsis of the six major themes emerging from the study results, based on Outsell’s analysis of the qualitative and quantitative data.